Have you ever wondered how to check the results of Facebook Ads setup with “Dynamic Creative?

This valid feedback will tell you what Facebook has determined is the most effective combo of creative elements  you selected in the setup of this ad type, based on the ad goals.

Why is this important? Read on to find out…

First of all, what is a “dynamic creative” ad?

When you are creating an ad with Facebooks Ad Manager, there is an option to setup your ad with “Dynamic Creative”. Simply put, instead of having to test one whole ad against another separate ad, with a different image or different headline or different text copy…what you can do is create one single ad and set it to have dynamic creative. And while you are creating that ad you can select and add multiple elements elements to include. Sound confusing? It’s not. Let me break it down for you.

As an example, I was setting up an ad for a client that operates a Pediatric Dental Office. 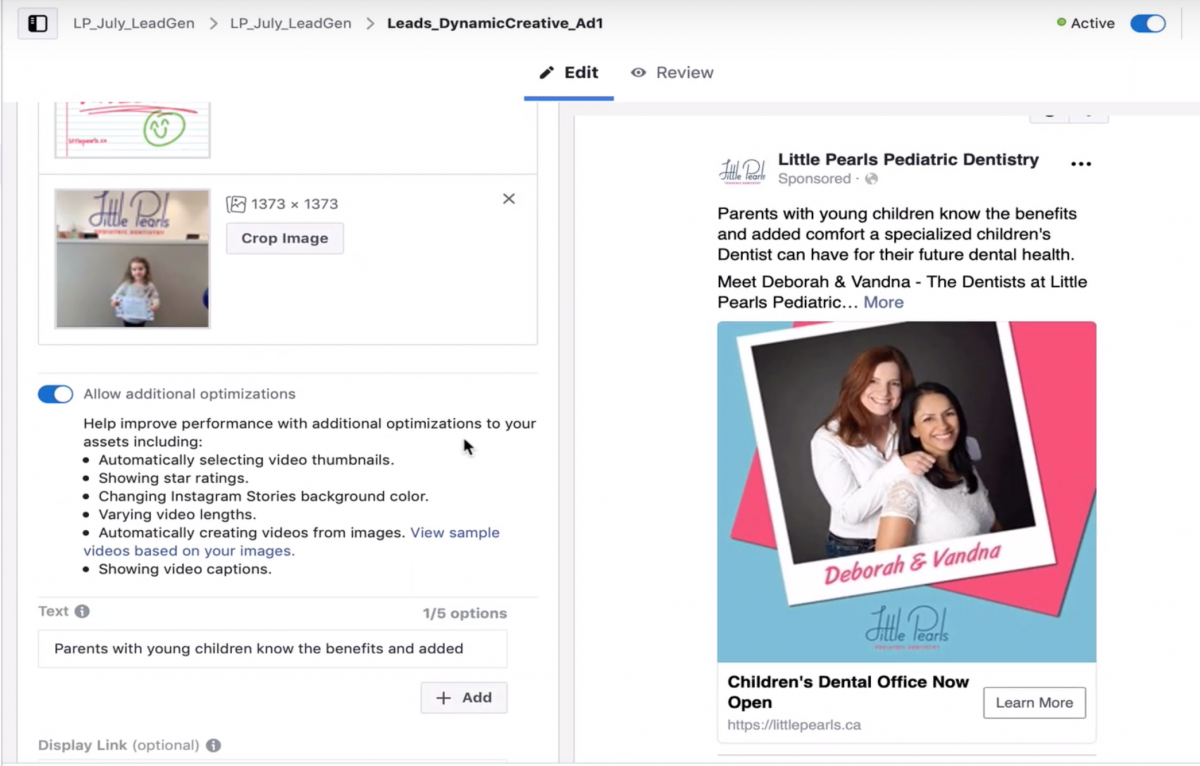 Generally, even this is a lot of variations. I would recommend you do not include too many variations unless you have a large budget. In this example, I have a smaller budget that I’m working with and just let the ad run for a couple days before preparing this blog post and video.

As I have only run the ad for a couple days, I am not really giving the algorithm enough time and resources to figure it all out, but you can start to see results immediately. What essentially happens is that while the ad is being delivered, Facebook’s algorithm  will dynamically choose a different image, landing page url, different title, ad copy text, even different a different combination of call-to-action buttons to show your target audience. The algorithm will choose different variations and show it. Over time you can see how your ad is performing by reviewing ad performance stats in Facebook Ad Manager.

How Do You See The Results? How Do You Know What The Best Ad Setup Is?

Step 1
To see performance results you have to login to Facebook Business Manager and open up the Ads Manager.
You will need to select either the ad set level or the ad level within ads manager to see those results.

As a reminder, for this example I only have a small budget I’m running with in this example, and it’s only been running for about a day, maybe even less. While I would recommend letting the ad run for longer to allow the algorithm to work it’s magic and show you more concrete results, at this point you can already start to review some results.

Step 2
In order to see the results you have to select the “breakdowns” menu tab and then select “by dynamic creative asset” and you will see several choices. 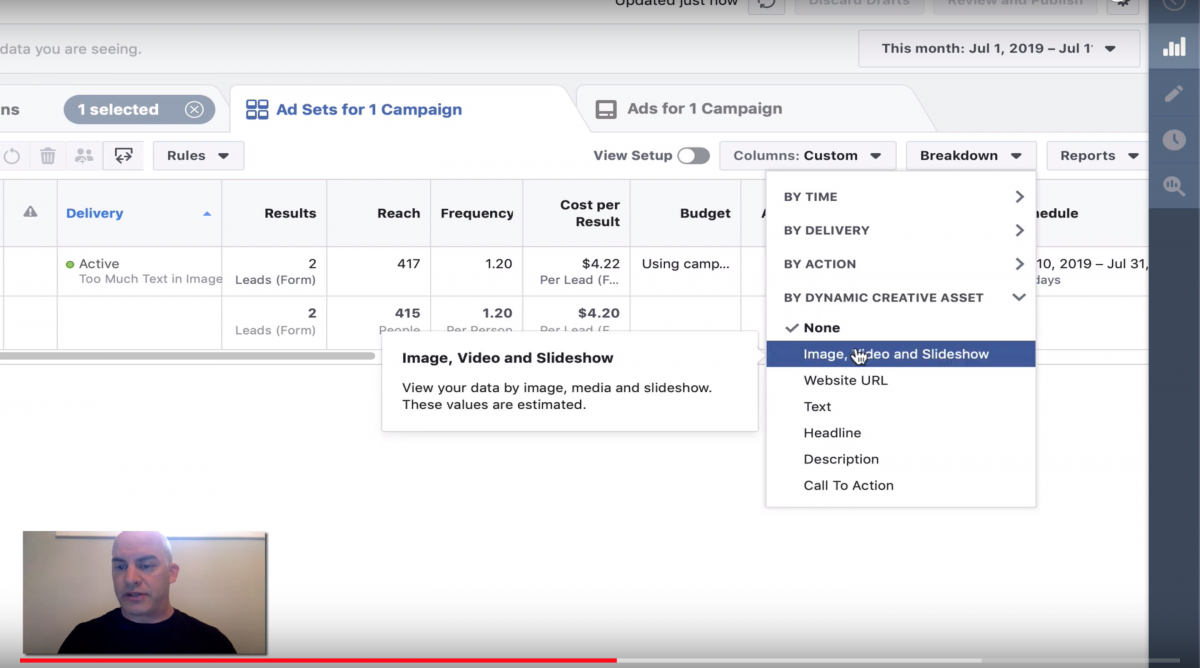 In the example above I’ve selected images as we have a test ad with 4 images.

One of the four images in this ad set I am planning to stop using as it is way too heavy in text. I wanted to test this image in this dynamic ad example to see what happens but, expected it would not perform as well as other images.

That’s exactly what the results show. Images with a high or too high (over 20% area of the image) amount of text will not get as much reach as other images. The algorithm will not show this image as often.

I can see that One of the images has already generated 2 leads. The goal of this ad type is to generate leads from a form right within the Facebook ad. This ad type does not take a user off the Facebook platform to a website landing page. The Lead Gen form is created as part of the ad and shown within the Platform or Facebook App.

By looking at a report like this, I can see which image is getting the most reach, review campaign results and determine which is best.

In this example, the timeframe is very short, the ad has only been running for a day, but I can already see results and if needed could make changes.

I can also look at which headline is performing better, as an example.

Why is this important?

In this case I’ve created this dynamic creative ad type to test results.

I can get an understanding of  which image or headline is most effective in achieving the maximum results based on the audience I am targeting.

I could try the best performing ad image(s) and headline to a new audience to see if I get similar results without having to again test different variations of creative.

I now know what works. I can learn which picture converts most results based on the goal of the ad. I would know which of the two headlines I tested perform best.

The next time I want to test this ad, let’s say I want to test to another audience, instead of having to go thought the whole process of creating an ad with dynamic creative again. Now I know the one or two variations that work the best and can create an ad with those specific elements.  What I learn from this dynamic creative test ad will help me identify which ad variables should perform best.

The next time you want to test multiple images, headlines and/or ad copy, consider trying an ad with Dynamic Creative as an alternate to testing multiple ad variations as individual ads within an ad set. It’s another opportunity to test overall results. It’s all about testing when it comes to Facebook and Instagram advertising and this gives you another way to  learn what results work best.

Stay tuned for future videos and posts on How to setup the facebook pixel, how to create facebook audiences, how to use hashtags in Instagram and more.

If you liked this video, head over to my YouTube channel and click the subscribe button (the bell). This will allow you to be notified when I release a new video.

Let me know what you think of Facebook dynamic creative ads and what results you have seen. Hit me up in the comments below.

Is your company ready to go social?